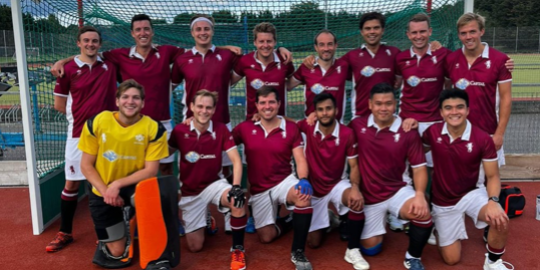 Another beautiful Autumn day for hockey. The M1s had despatched Oxford University earlier in the day as a nice support act for the main event on the card, the 3s against the 2s!

Ever since the London League ignored our request to keep the teams apart, the 1st October has been highlighted in the calendar as the date for friendly rivalry on the pitch.

The 2s started with a numerical disadvantage due to our usual poor availability and both sides took time to settle. The 2s had more possession and created a few half chances but were a bit obvious in their style of play, playing crash balls into thee circle and hoping for mistakes. The 3s, with a good number of new recruits, looked good on the break and also created a few half chances.

In the end the pressure told and Sibs put the 2s ahead with a pc flick low into the corner. Charlie G had a great chance to double the lead, hitting a tomahawk that hit the crossbar and flew high into the air, almost as high as Calum's attempt last week. The ball came down in the circle a few minutes later and was adjudged dangerous and a 16 awarded by MM - an unusual decision.

The second arrived soon after, Sibs having a well earned break so Dr Matt Baker took over at the top and flicked low to the RHS where Dr Mike Truell slid in and deflected the ball past Theo. The 3s had a break down the left before half time and Tim was called into action for the first time, making a smart save with the glove.

The second half was a bit more one sided, as the 3s tired the 2s had a lot of possession and would have scored more but for some fine defending from Faisal and some great saves from Theo.

Two more goals from pcs, the first from Sibs and a nice drag-flick from Charlie G. Sibs skilfully avoided a jug with the next few corners before a rare open-play goal from Charlie D who weaved his way through an improbable number of tackles before calmly passing the ball into the goal for our fifth.

The last play of the game gave the 3s a deserved consolation goal. A fast break down the right and a deflection which brought a smart save from Tim but the rebound fell to an unmarked forward who gleefully scored. Final score 5-1 to the 2s in a well-contested derby played in a good spirit. Thanks to Jonny and Marc for umpiring so well.

John and his team looked after us well with pie and mash and its good to see the bar back open. The 2s also won the boat race!

MoM: Charlie D for his wonder-goal

DoD: Clarky for progressing from a gentle rebuke to green and then to yellow.

Cookies
Some of our web pages utilise "cookies". A "cookie" is a small text file that may be used, forexample, to collect information about web site activity. Some cookies and other technologies may serve to recallPersonal Information previously indicated by a web user. Most browsers allow you to control cookies, includingwhether or not to accept them and how to remove them.

Some cookies are necessary for the operation of our website, if you choose to block them some aspects of the site may not work for you. Non necessary cookies are only set when you have given your explicit consent to their use. Such cookies included those set by our statistics package Google Analytics.

We use cookies to personalise content and ads, to provide social media features and to analyse our traffic. We also share information about your use of our site with our social media, advertising and analytics partners who may combine it with other information that you've provided to them or that they've collected from your use of their services.

Thanks for your message!

We will do our best to get back to you as soon as possible.